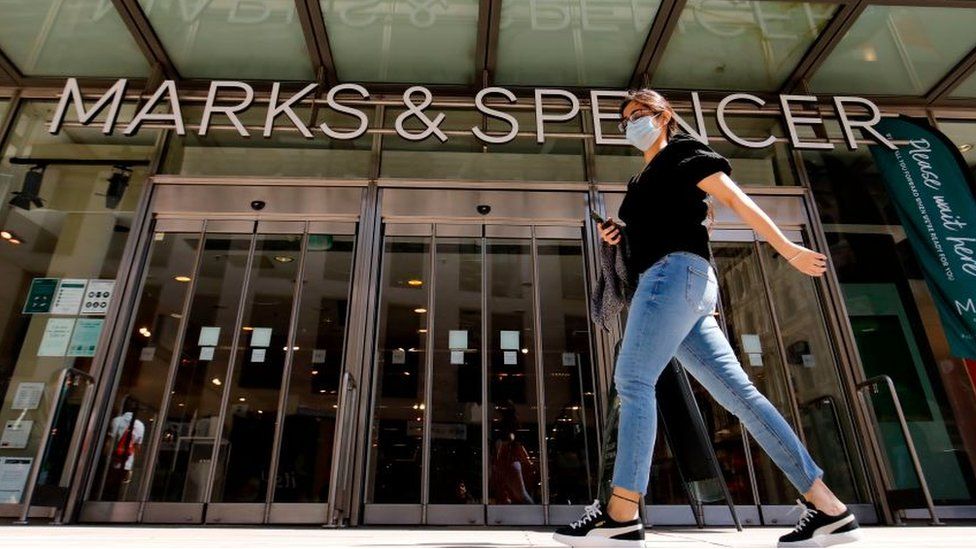 Marks and Spencer reported a surge in profits as its food division helped it bounce back after Covid restrictions.

Boss Steve Rowe said growth was boosted by pent-up demand after lockdown, but the retailer was also seeing the benefit of its long restructuring.

Pre-tax profits for the six months to October were £187m – 17.9% up on the period two years ago before Covid hit.

But M&S said it was planning for “significant” increases in supply chain costs because of worker shortages.

The retailer also forecast costs will rise during the rest of the financial year and be “steeper again” in 2022-23.

During the six months, food sales increased by 10.4%, while overall sales in clothing and home fell by 1%, but full-price sales rose 17.3%.https://buy.tinypass.com/checkout/template/cacheableShow?aid=tYOkq7qlAI&templateId=OTBYI8Q89QWC&templateVariantId=OTV0YFYSXVQWV&offerId=fakeOfferId&experienceId=EXAWX60BX4NU&iframeId=offer_0e763acc7b457c03340a-0&displayMode=inline&widget=template&url=https%3A%2F%2Fwww.bbc.com

Mr Rowe said that “for the first time we can see that the hard yards of driving long-term change are beginning to be borne out in our performance”.

Despite the strong results, Mr Rowe said that “given the history of M&S”, the company wouldn’t “overclaim our progress”.

On the back of the firm’s half-year results, M&S shares were up 20% on Wednesday morning, despite the warnings over driver and warehouse worker shortages.

Like many other companies, M&S said lorry driver shortages were posing challenges, but added it had deployed several recruitment projects and incentives to attract new drivers and that it believed its food business was “comparatively well placed” to deal with the shortages.

The department store added it hoped to drive “long-term growth and loyalty” by offering a better service and quality through its food delivery deal with Ocado.

M&S owns a 50% share of Ocado’s retail business, which switched to delivering M&S food in September 2020.

Commenting on the latest results, Susannah Streeter, senior investment and markets analyst at Hargreaves Lansdown, said M&S’s move to raise its full-year profit forecast to about £500m showed “how lucrative the food arm of the business has become”.

“Marks and Spencer may have been late to the grocery e-commerce party, but arriving with Ocado in arm, it’s muscled into a prime spot on the dance floor, and is enjoying the hits”, she said.

“It looks like this long suffering high street stalwart has turned a sharp corner, proof that management’s transformation strategy is paying off. Rather than a department store which sells food as an extra, Marks is metamorphosing into a grocery powerhouse which sells clothes and homewear as add-ons.”

Julie Palmer, partner at Begbies Traynor, agreed M&S’s food business continued to be the company’s “cash cow”, but warned the company would need to hold on to its transformed brand and soften the impact of supply chain issues to if it “hopes to avoid disappointing investors this festive period”.

Meanwhile, Richard Hunter, head of markets at interactive investor, said Marks & Spencer “was one of many companies where the pandemic forced accelerated change and the results are beginning to bear fruit”.

“Perhaps most noticeable is that the slumbering giant which was the clothing and home business is showing signs of renewed life,” he said.

“Previously seen as tired and dowdy, the general offering has been reinvigorated and the signs to date are promising.”

“It’s quite nice to be making some money again,” quipped Archie Norman, the chairman of M&S, on its glossy results presentation video.

This retailer has been through umpteen turnaround plans, but is this latest one, started four years ago, finally starting to yield results?

These figures certainly show encouraging signs, with a bounce back in sales from the worst of the pandemic last year.

The business has also emerged in better shape. Food is driving sales and profits, but full-price clothing sales are also up 17%, delivering higher profits in this division, too.

And online sales have increased by 60% compared with two years ago. M&S now needs to deliver Christmas amid all the operational challenges this crucial trading period will bring.

There are plenty of supply chain issues and cost pressures bearing down on all retailers. But after years of false dawns, this is a business that now feels confident that it is on the right track.

Graham Stapleton, chief executive, said demand for bicycles remained “good”, adding the company was “pleased” with the current availability of children’s bicycles and electric bikes in the run-up to Christmas.

However, Mr Stapleton said “moving anything” around the world in the past six months had been “particularly challenging”, with freight costs sometimes as high as 10 times the normal rate.

“Even if goods are manufactured and a container is found to ship them to the UK, the recent HGV driver shortage has meant that this final leg of the supply chain has been more costly and unreliable,” he said.