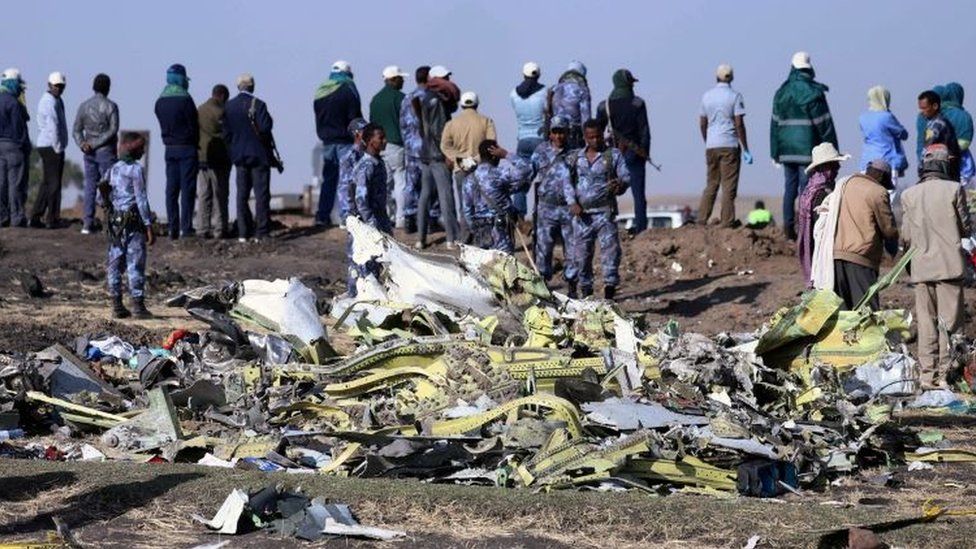 Boeing has reached an agreement with the families of the 157 people who died in the Ethiopia 737 Max crash in 2019.

The plane maker accepts liability for their deaths, according to court documents in Chicago.

In return, families of the victims will not seek punitive damages from the company.

Lawyers for the victims’ families said Boeing would still be held “fully accountable”, welcoming the agreement as a significant milestone.

The agreement opens the way for families outside the US, in countries such as Ethiopia and Kenya, to claim compensation through the US courts, rather than in their home countries, which might be more difficult and result in lower payments.

Mark Pegram in the UK, whose son Sam was one of the victims, said: “The main positive for us is that Boeing is admitting liability, and not diverting blame onto Ethiopian Airlines or the pilots… we wanted them to hold their hands up.”

Sam’s mother Debbie told the BBC: “All we are looking to do with any compensation is set up a charity in Sam’s name. It’s what we want to do and it’s what Sam would have wanted us to do.”

At the time of the crash, the 737 Max was Boeing’s best-selling plane.

But two fatal accidents within five months – the Ethiopia Airlines flight out of Addis Ababa and before that a Lion Air jet that came down into the sea off Indonesia – signalled there were serious faults with the aircraft.

The planes were grounded for 20 months, while investigations took place, but have since been allowed to return to operations after the firm made significant changes to their software and training.

Words are important and in this agreement Boeing accepts responsibility for the crash of ET302 – a disaster which claimed the lives of 157 people from 35 different countries.

The world may have moved on and the 737 Max may be flying again, but for many of the families of those who died, the grief and sense of loss remains very raw indeed.

In the period since the two accidents involving the 737 Max, Boeing has faced criticism for appearing to deflect blame elsewhere, for example by questioning the abilities of the pilots.

So that admission of liability really does matter.

For Boeing, the agreement provides some protection, by removing the possibility of relatives seeking potentially very high punitive damages and by making it unlikely current or former executives will be called to testify in court.

Alongside the settlement reached in a lawsuit bought by shareholders last week – who had been suing the company over unsafe business practices – it removes much of the legal jeopardy the aerospace giant had been facing.

But the company has made a significant concession. It has agreed that all compensation claims can be made under US law, which provides for much higher levels of compensation than would apply in many other countries.

The agreement reached in Chicago, Illinois, where Boeing is headquartered, opens the way for compensation claims to be made.

While it does not stipulate any specific level of compensation for the victims’ families, the agreement will limit the scale and scope of any further procedures.

Legal experts say it makes the prospect of current or former Boeing executives testifying in court much less likely.

“Boeing is committed to ensuring that all families who lost loved ones in the accidents are fully and fairly compensated for their loss,” the plane maker said in a statement.

“By accepting responsibility, Boeing’s agreement with the families allows the parties to focus their efforts on determining the appropriate compensation for each family.”

Lawyers for the victims released a statement saying that under the agreement, Boeing admitted “that the 737 Max had an unsafe condition, and that it will not attempt to blame anyone else” for the crash.

“This is a significant milestone for the families in their pursuit of justice against Boeing, as it will ensure they are all treated equitably and eligible to recover full damages under Illinois law, while creating a pathway for them to proceed to a final resolution, whether through settlements or trial,” the lawyers said.

In January, Boeing agreed to a deferred prosecution agreement with the US Department of Justice, including $2.5bn (£1.9bn) in fines and compensation stemming from the 737 Max crashes, including the Lion Air crash in October 2018.